HIO Fitting has welcomed Cobra Golf into its assortment of golf clubs since 2016. Cobra’s most prominent staff player, Rickie Fowler, represents our colourful spirit. Cobra joined our team in 2016 when we were looking to expand our product portfolio. In typical HIO Fitting fashion, we conducted exhaustive tests from which Cobra Golf emerged victorious against other brands.​ ​ We introduced only select few clubs into our portfolio of which the first was the BiOcell+ driver in a limited black

edition. This was followed by the King F7, King F7+, King Ltd, King Ltd Pro, King F7 Ti and King F7 HT in 2017. For those looking to follow the trend inspired by Bryson DeChambeau, we also offer a fitting for the Cobra single-length irons from 2017 onwards.​ ​ ​

Distance starts with speed!​
Faster ball speeds thanks to the new SPEEDBACK technology. Revolutionary develops in a lower CG, more efficient aerodynamics and a CNC-milled Precision Club Face Technology as the ultimate formula for speed.​

Like its predecessors Cobra Fly Z+ and King F7, Cobra uses the King F9 to change the center of mass (CoG) on the sole with the help of weights. This allows fine-tuning of the flight curve (draw or fade) and backspin rate in the fitting.​ ​

The SPEEDBACK technology provides the most aerodynamic club face shape from Cobra. This design promotes an optimised, uninterrupted airflow from the front edge to the rear of the driver. The air resistance is reduced to maximise club speed.​

As with its predecessors, Cobra relies on the proven Forged 8-11 Titanium E9 face. This delivers a consistently high ball speed over a very large part of the clubface, so that even hits outside the sweet spot can still fly extremely far.​

Three different models (9.0°, 10.5° and 12.0°) feature 8 adjustable lofts and a front-to-back CG system that allows golfers of all skill levels to find the perfect start & spin configuration for their game.​ ​

The Cobra King F9 is available in yellow/black and white/black. The driver offers its player an extremely sporty, futuristic design.​ 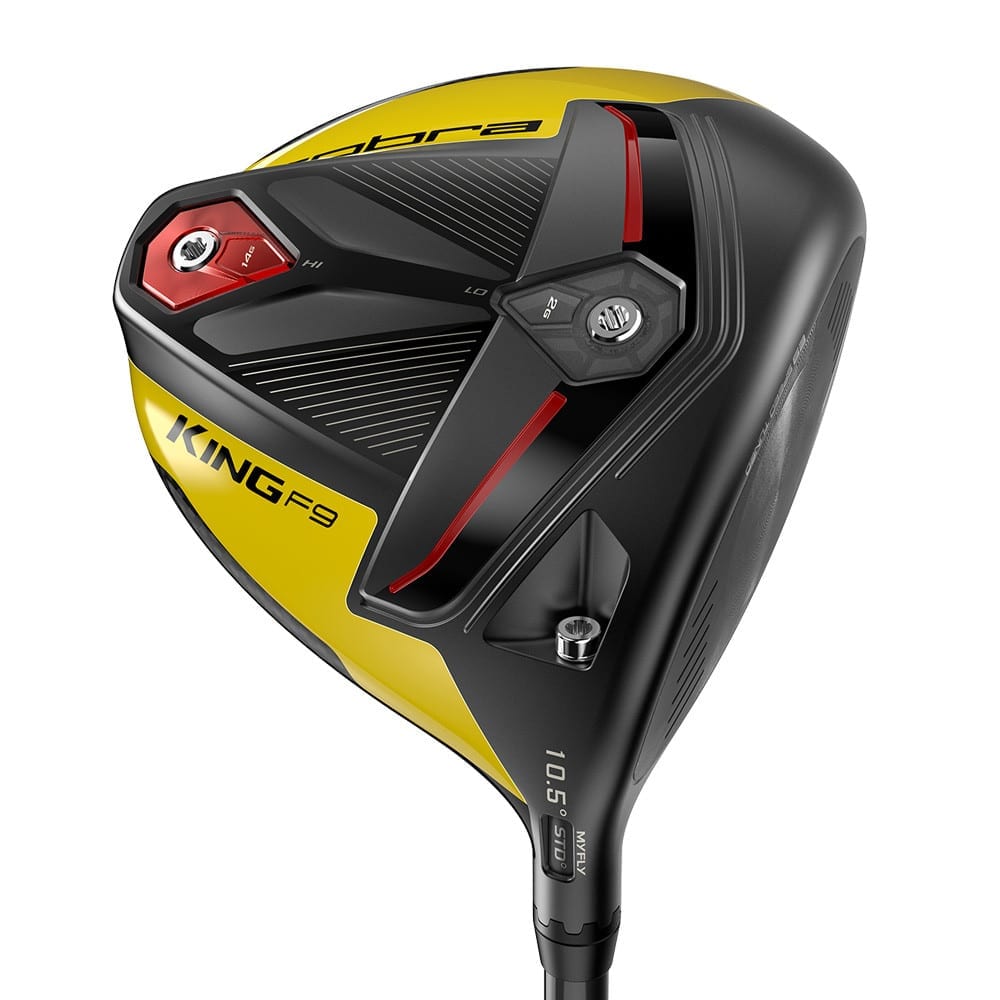 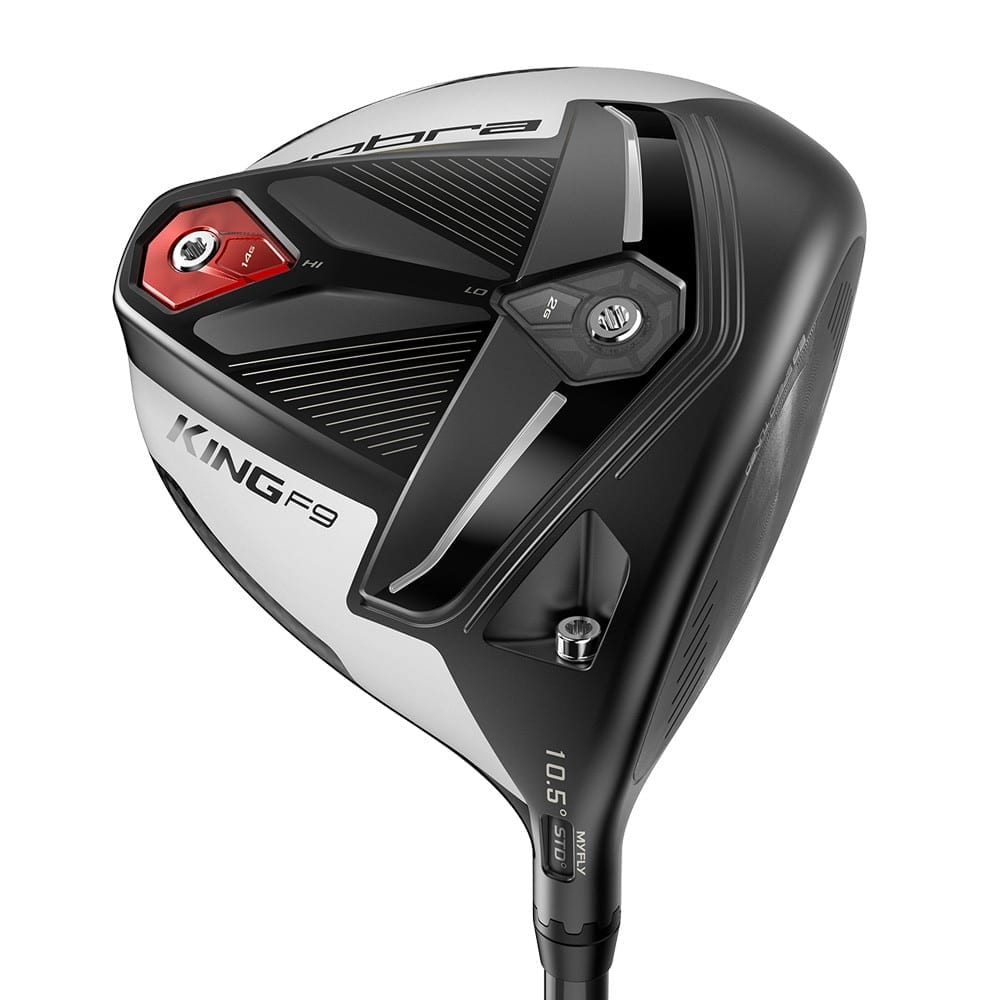 Our tester (HCP +1) had the following average values:​

Our test person felt slightly insecure with the King F7+ and would go for the standard version despite the low handicap (this is totally subjective and every better player should try it out for himself). With the standard King F7 version the ball got too much backspin even with the lowest loft setting, which meant that the ball flew too too high.​

Looks can be deceiving – while the feeling at setup was more comfortable for the King F7 driver, it yielded mediocre results for our test person. However, this golf club works differently for different player types, i.e. just because the King F7 went too high during our tests, the driver produces ideal spin behaviour and flight altitude for someone who doesn’t hit 250 meters in flight. ​ ​

In the setup, our tester liked that both versions had neutral or even slightly open face. This gave him additional security in the setup as a draw-hook player. The sound can be described as neutral and is playing partner friendly. The look is adjustable thanks to various color options.​

Always a plus:​:
The choice of colours. This is always a popular feature at HIO Fitting​!
King F9:
Better players should definitely have tested the King F7+ and should check the correct loft setting on the launch monitor for spin and launch behaviour (fitting!). 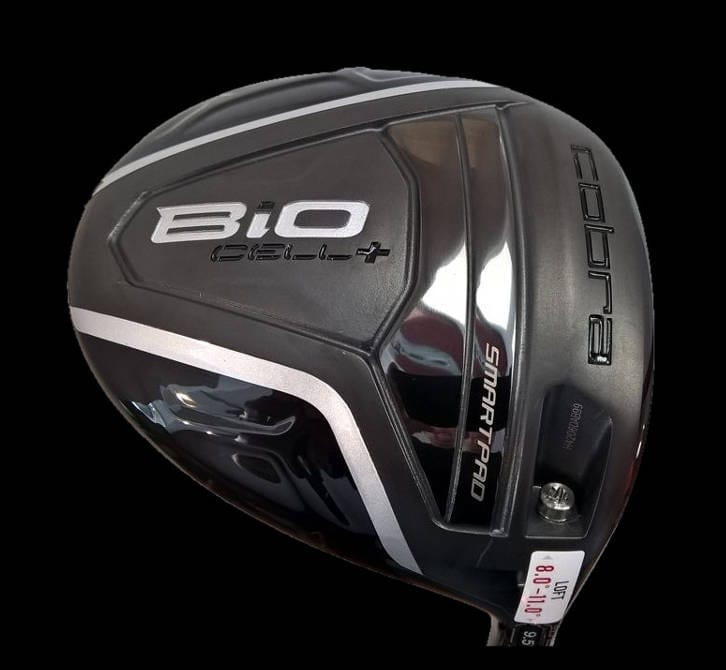 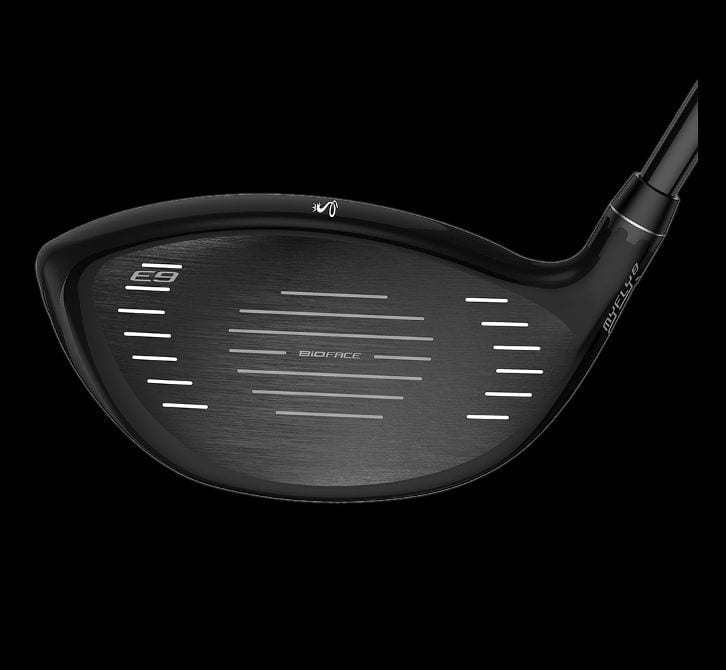 Tested by HIO Fitting and found to be extremely performant. Thanks to a cooperation with Cobra we were able to add a limited edition of the sporty driver BiOCell+ to our program. In our opinion one of the best drivers on the market in the last 5 years. Despite Cobra bowing to the pressure of the industry therefore having released more than 7 new models since the BiOcell+ (in the last 2 years), we at HIO Fitting stick with it. We have tested all recent releases against each other and still find the BiOcell+ unsurpassed in terms of performance and playability. At least for players who struggle with a high ball flight. According to the motto, “new doesn’t always mean better” and we would still recommend a BiOcell+ to players suitable of handling it since we haven’t seen a better model on the market yet.​

Suitable for:
Longhitters and good players who are looking for lower drives with more roll.​
Not suitable for:
Players with slow swing speed, beginners​

The Cobra AMP (Advanced Material Technolgy) saves weight on the crown of the club head and marginally shifts it to the rear. High launch and low spin are the results that make the ears of all distance hunters prick up and make the 440cm² small head very interesting for many of the better players.

The E9-forged face delivers consistently high ball speed over a very large area of the face, so even hits outside the sweet spot can fly extremely far.​

The driver is only available in the sporty version and the optically very successful matt black Limited Edition. The MyFly8 system ensures that you can play the driver in 8 different face positions 8°-11° (each neutral and draw). However, it must be emphasised that this driver gets little spin – even in the 11° version it is not a driver that is easy to “get into the air” if the player does not generate enough power (swing speed). On the other hand, there will be few players who will hit the Biocell+ set to 8° too high.​

Our tester (HCP +1) had the following average values on the launch monitor with the Cobra BiOcell+ Limited Edition:​

It was noticeable that when the Cobra Biocell+ was hit off centre the ball speed remained high, but the back and side spin varied slightly more than usual. Nevertheless, the distance remained very consistent and our test person never felt uncomfortable during testing. Positive compared to all the drivers we tested so far was that it actually fulfilled the “High Launch” and “Low Spin” criteria.​

For a 440cm² large club head, it was incredibly forgiving. Players who are into small heads will not lose much of the forgiveness with this model. The HIO promise: Both appearance and sound will make any golfer in the world adore this driver! HIO recommends the driver for the professional level playing strengths​ ​

From 400€ incl. a high end shaft… For golfers who have sufficient swing speed and play well enough to benefit from the BiOCell+, the standard shaft is out of the question in our opinion: HIO Fitting consequently avoids the standard shaft for fitting and quality reasons.​ 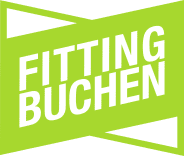